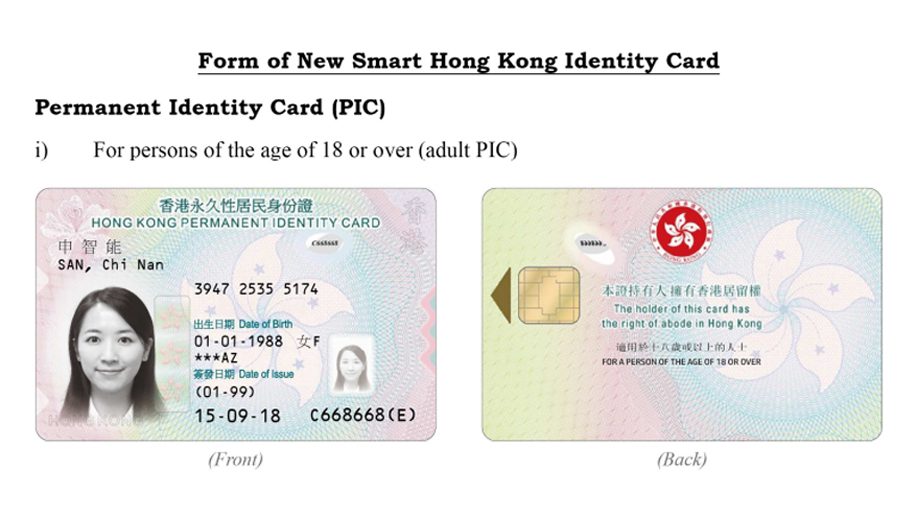 Hong Kong residents’ new smart identity cards will have features that can support the use of facial-recognition technology, potentially opening the way for expanded biometric screening when entering and leaving the city.

The design for the new cards was unveiled yesterday and sees a number of aesthetic and security changes to the existing identity card. A digital photograph and the cardholder’s gender will be stored in the chip, which will now be located on the back rather than the front of the card, alongside existing information such as English and Chinese names, date of birth and the card’s date of issue. Meanwhile the photograph has shifted from the right to the left-hand side, while a smaller stereo laser image has been placed on the right-hand side. Built-in radio frequency identification (RFID) technology has also been added to improve security.

The introduction of the digital photograph in particular could pave the way for potential for facial-recognition screening when passing through immigration, however the government has not confirmed whether such security processes are set to be introduced in the foreseeable future.

Such a feature notably would enable Hong Kong International Airport to catch up with rival Changi Airport in Singapore, which recently opened its new Terminal 4 featuring end-to-end automated processes, including biometric screening for check-in, baggage drop, immigration and boarding. Hong Kong’s airport is set to introduce a number of enhancements and new developments over the coming years, notably focusing on leisure and lifestyle, however little mention has been made regarding improvements to its immigration and security screening processes.

Hong Kong residents’ identity cards will begin being replaced from the fourth quarter of 2018, with full replacement expected by 2022. The government is setting up nine card replacement centres to support the process.

As with the city’s last card replacement plan from 2003 to 2007, when Hong Kong first introduced smart identity cards, the new replacement plan will be done in stages, with residents being invited in phases according to their age (a breakdown of age groups and dates has not yet been unveiled). However, current cardholders aged over 65 or above (with the bird year 1954 or earlier) will be able to replace their cards at any point throughout the process.

Meanwhile, current cardholders that reside overseas can simply apply for a replacement card within 30 days of their next return to Hong Kong, without needing to do so within the timeframe for their age group.

Loading comments...
Read Next
Thousands of American Airlines flights next month have no pilots
Read Previous
New US domestic routes for premium Delta One
Our Awards