Daily flights will launch on April 26, departing Reykjavik at 2110 and landing into JFK at 2325, with the return leg leaving New York at 0440 and landing back into Iceland at 1045.

Connections will be available on the carrier’s new Stansted service which also launches in late April, with a total journey time of 11 hours and five minutes on the US-bound leg, and ten hours 35 minutes London-bound, as follows:

Wow Air is advertising the new route with special lead-in fares of just £99 one-way between London and New York (valid for travel in April and May 2018), saying that “Due to the UK having the highest taxes on airfares in the world, the airline’s £99 offering is £24 less than the sheer cost of getting every passenger on their way”.

When Business Traveller checked today (November 11) the £99 outbound fare was still available on selected dates, with £139 being the lowest available fare from New York JFK to Stansted. Note that these “Basic” fares do not include either checked or carry-on luggage.

“We are proud to constantly be lowering fares across the Atlantic, enabling more people to fly in our brand new aircraft and to experience the world.

“Air Passenger Duty in the UK is one of the highest in the world and we would love to change this. These low fares make a statement and allow our passengers to fly affordably.“

The airline recently announced new routes to the US cities of Detroit, Cleveland, St Louis and Cincinnati next summer. 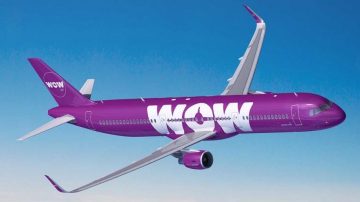 News
Wow Air to launch flights between the UK and Pittsburgh
7 Nov 2016
Loading...