Qatar Airways has just acquired 9.61 per cent of Hong Kong’s flagship carrier, Cathay Pacific, making it the third-largest shareholder in the Asian airline behind Swire Pacific Limited and Air China Limited, which together hold 74.99 per cent of the company’s shares.

It’s a move that appears to signal the Qatar carrier’s confidence in the Hong Kong airline’s ability to rebound from its recent financial struggles, largely the result of increasing competition from the Middle Eastern airlines as well as mainland Chinese and low-cost carriers.

Last year, Cathay Pacific lost HK$575 million (US$73.6 million) in its annual revenue, which was followed by a HK$2.05 billion (US$262 million) loss in the first half of this year. The airline cut 600 jobs in May as part of measures to rebound from its losses.

Qatar Airways Group chief executive, Akbar Al Baker, said, “Cathay Pacific is a fellow Oneworld member and is one of the strongest airlines in the world, respected throughout the industry and with massive potential for the future.”

Precisely how the dynamic between the two airlines in terms of future cooperation will look is yet to be seen. In a statement regarding the sale, Cathay Pacific’s CEO, Rupert Hogg, said, “We already work together closely as fellow members of the Oneworld alliance and we look forward to a continued constructive relationship.”

Cathay Pacific has been expanding its cooperation with other airlines this year as part of attempts to better compete with the Gulf carriers. Among the most notable partnerships is one with Star Alliance member Lufthansa that took effect in April this year, adding codeshare and frequent-flyer collaboration between the two companies.

Meanwhile, Qatar Airways has been ramping up its attempts at investing in other carriers. Most recently, this included the airline’s planned bid for US$808 million in shares of American Airlines, which it decided to drop in August after the US reiterated its commitment to see the enforcement of the Open Skies agreement between the US and Gulf countries. 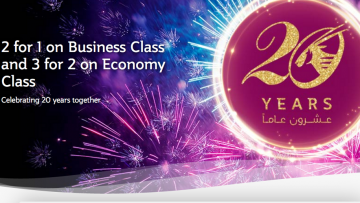