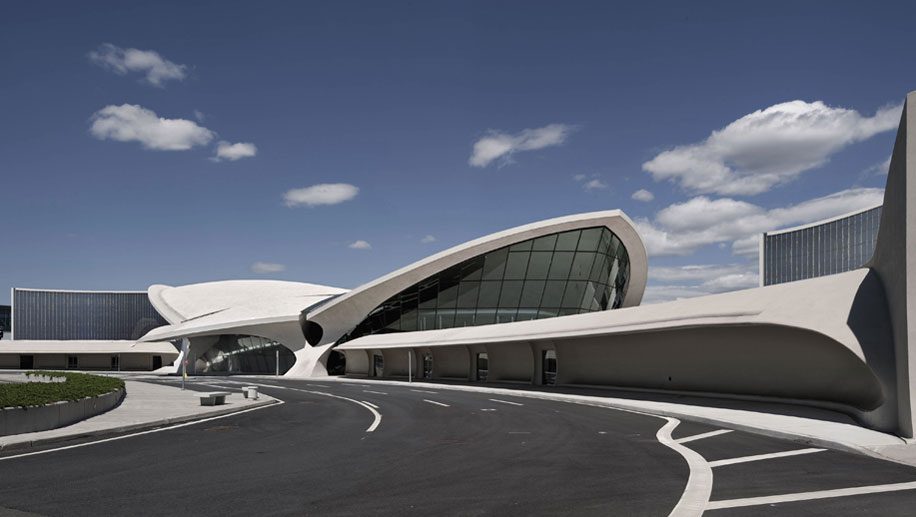 A rooftop pool with planes roaring overhead is among the newly revealed features of the hotel being built in the old TWA terminal at New York’s John F. Kennedy International Airport.

Bloomberg reported October 2, 2017 that new design renderings of the 505-room hotel from developer MCR Development LLC offer some details on how the landmark terminal, designed by famed architect Eero Saarinen and opened in 1962, will be reimagined as a luxury destination for travellers.

The central lounge area, carpeted and upholstered in TWA’s signature red, will become the hotel lobby and be surrounded by eight bars and six restaurants, including one built in an around a classic Lockeed Super Consellation prop-driven airliner, affectionately known as a “Connie.” The terminal’s former Lisbon Lounge, Paris Café, and Ambassador’s Club will also find new life as drinking and dining spaces.

The terminal’s mechanical flight-information boards will be revamped and repurposed to deliver hotel and event related messages. Guest rooms will be housed in a pair of new towers curving over the former terminal building. The hotel will also feature a TWA museum and a 10,000-square-foot observation deck open to the public, and will connect to JFK’s Terminal F via its original tunnels.