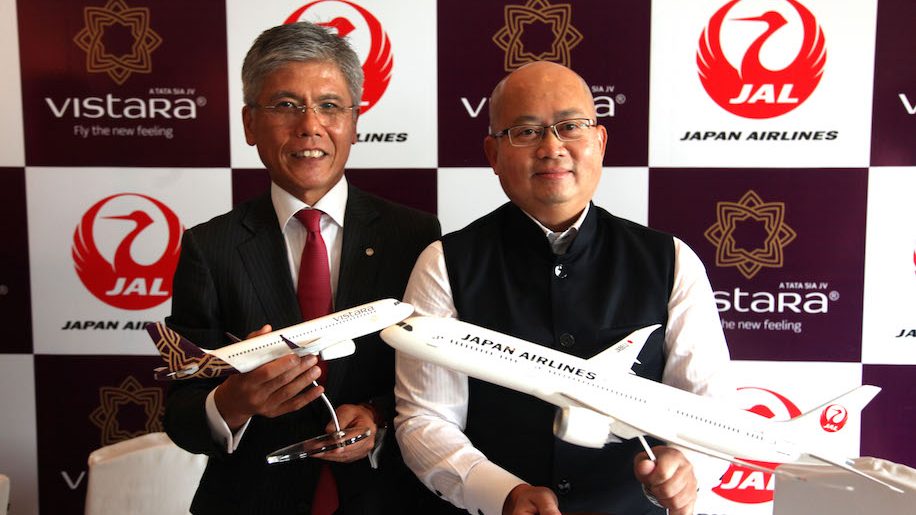 Japan Airlines and Indian full-service carrier, Vistara have signed a Memorandum of Understanding (MoU) for commercial cooperation. It includes codeshare, frequent flyer partnership, as well as benefits from each other’s network and assets, “subject to necessary approvals from authorities”.

Phee Teik Yeoh, the CEO of Vistara, said, “Vistara and Japan Airlines share a great deal in common, key among which are the focus on excellence in operations and delivery of exceptional service to customers. We’re delighted to enter the next phase of our association with Japan Airlines, and we believe that this is only the beginning of many other great offerings to come.”

Earlier this year, the two carriers had entered into an Inter-Airline Through Check-In (IATCI) partnership. This enables passengers with multiple itineraries to check-in with a single ticket bought from one airline, valid for onward connections on the partner airline’s flights. It eliminates the need to purchase multiple tickets for multiple routes on connecting flights.

Tadashi Fujita, the JAL executive vice president said: “The strengthened partnership with Vistara represents a significant milestone for the two airlines to provide customers better access to destinations between and in Japan and India. We believe it will open up commercial opportunities on the two airlines’ networks.”

JAL operates a daily non-stop service between Tokyo and Delhi.

Through this partnership, Vistara’s passengers will now be able to travel to Tokyo via Delhi, and to onward destinations within Japan and worldwide on JAL’s network. Likewise, passengers of JAL will be able to connect to Indian cities on Vistara’s network.