Malaysia Airlines plans to carry out renovations to its Heathrow T4 lounge later this year, as the carrier continues its rebranding and recovery programme.

MAS originally announced plans for an “extensive redesign” of its Golden Lounges at Kuala Lumpur International and London Heathrow in May last year, with new features including a demonstration kitchen “allowing guests to interact with chefs”, and fine dining in first class lounges.

Since then the airline has begun renovating its Regional and Domestic Garden Lounges at KLIA – this work had originally been scheduled to finish in mid-August, but the lounges are now set to be closed until the end of September.

The carrier’s lounge at Penang airport is also currently closed for refurbishment.

These will then be followed by its International Lounge within the Satellite Terminal between October and December, and the Heathrow T4 facility in the fourth quarter of this year.

Further ahead MAS plans to renovate its lounges at Kota Kinabalu and Kuching early next year.

The airline is scheduled to take delivery of its first A350 towards the end of this year, and is set to operate the aircraft on its Kuala Lumpur-Heathrow route from January 2018. 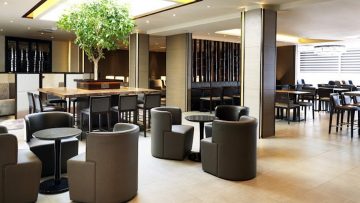