Virgin Trains says there has been an “historic shift” in travel patterns between London and Scotland, as the rail operator grabbed a record share of the London-Scotland air/rail market in June.

The firm recorded an 18 per cent year-on-year growth in passengers travelling between London and the Scottish cities of Glasgow and Edinburgh in June.

This resulted in the operator achieving a 33 per cent share of the air/rail market in June (according to figures for direct air journeys provided by the Civil Aviation Authority), beating the previous record of 32 per cent set in 2014.

Virgin Trains said that factors including lower fares, as well as refurbished trains and an additional 25 London-Edinburgh weekly services on the East Coast, and improved punctuality on the West Coast line have contributed to the growth figures.

A total of 180,000 customers travelled with Virgin Trains between London and Edinburgh/Glasgow in June, up from 152,000 the previous year.

The group said it has seen “similarly strong growth in July and August and expects to retain its record-breaking market share, though comparable CAA figures for airlines are not yet available for these months”.

Virgin says it aims to account for 50 per cent of the London-Edinburgh market by 2023, following the introduction of its new Azuma fleet, which will reduce journey times to four hours.

The group also highlighted a new report by transport charity Transform Scotland, which said that Virgin Trains’ growth on the west coast between Glasgow and London over the last decade “has saved enough CO2 to take 145,000 cars off the road for a year”.

“The Scottish Government has set some of the toughest climate change targets for the people of Scotland. I am therefore delighted to hear of the increase in the use of our railway, as it is a fundamental part of achieving our greener transport aspirations.

“I welcome the publication of this Transform Scotland report which showcases the environmental benefits of rail, and underlines the importance of having high speed rail connectivity between Scotland and London.” 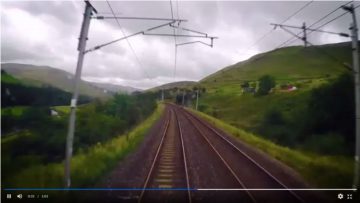