In a surprise announcement late yesterday Ryanair said it would not be starting numerous services to the Ukraine this coming autumn, as we reported only a few months ago.

In a statement Ryanair claimed that Kiev airport had failed to honour its commitments. (These would likely include special fees for handling Ryanair flights, marketing support and so on).

“We regret also that Lviv Airport [to which Ryanair had also planned services] is also a victim of Kiev Airport’s decision.”

But the news doesn’t end there.

Just this morning Reuters reported that Ukraine’s infrastructure minister has said he would seek to sack the head of Kiev Airport.

“Tomorrow I will propose to the cabinet the dismissal of Pavlo Ryabin (the director of Kiev’s Boryspil airport).

It means that tens of thousands of travellers both from the UK, mainland Europe and Scandinavia will no longer be able to take the low-cost flights they have already booked.

At the time of writing it is unclear whether or not other arrangements [by rival carriers] will be offered.

However this morning, Wizz Air, a rival to Ryanair, swifty issued a statement in Germany saying it would offer “rescue fares” for those travellers taking the Berlin-Lviv route.

As the news circulates (many Ryanair travellers will be unaware of the cancellations) other airlines may come forward.

What it shows is that the LCC (low-cost airline) business model for large carriers like Ryanair/Easyjet works best in those countries with open, competitive economies. 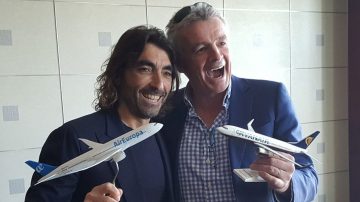