KLM is to launch a new non-stop route between Amsterdam and San José, Costa Rica from the end of October.

The carrier currently offers a one-stop service to the Costa Rican capital via Panama, with the Panama-San José leg being operated by Copa Airlines through a codeshare agreement, but KLM said that “The increasing interest of the European market in this beautiful country convinced us to start a direct flight to San José”.

Flights will operate on Tuesdays and Fridays, departing Amsterdam Schiphol at 1525 and arriving into San José at 2005. The return leg will leave the Costa Rican capital at 2205, landing back into Amsterdam at 1510 the following day.

The route will be served by KLM’s B787-9 Dreamliner aircraft, fitted with 30 World Business Class seats, 219 in economy, and 45 in Economy Comfort.

“This new flight, not only will facilitate visits to our country, but also thanks to KLM´s global network, this route will serve as a liaison for Costa Rica to open its doors to tourists from all Europe.

“This will for sure strengthen tourism in our country, generating benefits to the more than 600,000 persons who work in this activity in direct and indirect manner, and to the communities that find in tourism their opportunity to grow.”

British Airways launched direct flights from Gatwick to San José in May 2016, using B777 aircraft. 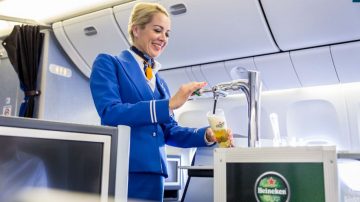