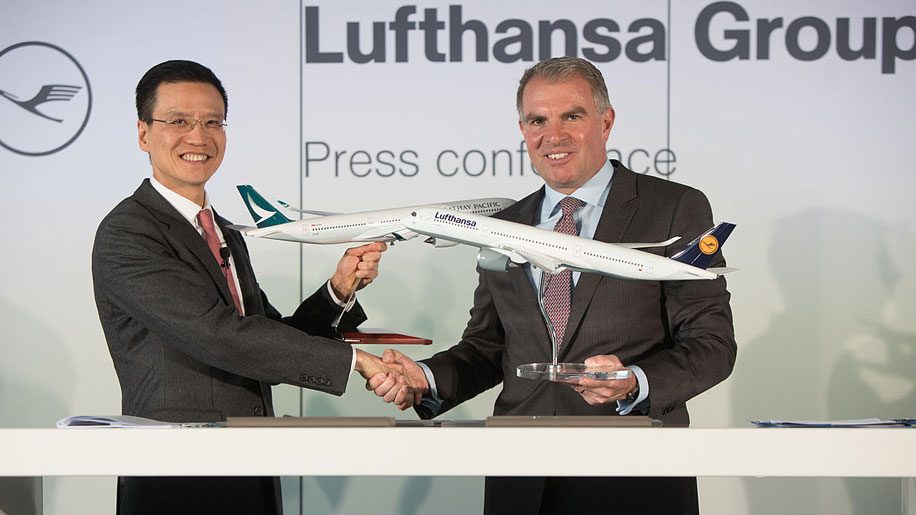 The agreement takes effect from April 27. In Europe it will involve Lufthansa mainline along with Swiss and Austrian Airlines.  (Note: Brussels Airlines is not included).

There are two main advantages:

“This new codeshare agreement will offer our passengers enhanced connectivity to destinations in continental Europe.”

“Cathay Pacific and the Lufthansa Group are forming a ground-breaking partnership. It strengthens our global network of strategic partnerships and further improves our airlines’  offering on Asian routes in the interests of our passengers. It supplants existing commercial joint ventures with All Nippon Airways [ANA of Japan],  Singapore Airlines (SIA), Air China and other Star Alliance partners in Asia.”

All these airlines have agreed to cooperate in order to better compete with the Gulf carriers.

Additionally Cathay Pacific is threatened by several airlines in mainland China who are gradually expanding their global networks and with whom (because of their cost structures) Cathay Pacific simply cannot compete on price. And the latter is one reason why Cathay Pacific is poised to retrofit its B777s with ten-across seating in economy class.

For example, Hong Kong-based travellers can now access Europe via Shanghai, Beijing and the Gulf, in addition to the traditional routings offered by Cathay Pacific and the European airlines.

One suspects that the competition has become so fierce that Oneworld’s Cathay Pacific has little choice but to cooperate with these rival (non Gulf-based) Star Alliance airlines.

But there will be many conflicts of interest. This is why the cooperation agreement does not extend to every destination on these carriers’ networks.

One wonders what Singapore Airlines or Air New Zealand will be thinking at present. Until now the Lufthansa Group has relied on Singapore’s national airline and ANZ to convey their passengers between Asia, Australia and New Zealand.

It is true that SIA offers more Australasian destinations than any other but this new JV will still represent competition.

Some readers have asked when the new schedules will become available.

This morning (March 28) I checked with Lufthansa.com, Swiss.com and Cathaypacific.com for various routings in May and June. Schedule changes have yet to be made.

For example, I checked Cathaypacfic.com for Berlin-Taipei thinking it would offer me a routing via Frankfurt and Hong Kong but the display still provided the existing routing via London Heathrow and Hong Kong.

I also checked Swiss.com for a routing between Zurich and Sydney. Yet again the display indicated that I fly via Singapore using SIA for the onward sector to Sydney.

A spokesperson for Oneworld (the rival alliance to Star) commented:

“Oneworld has a long-established flexible approach towards its member airlines working with partners outside the alliance where it makes sense for their businesses and their customers. Many Oneworld member airlines have such relationships in place.”