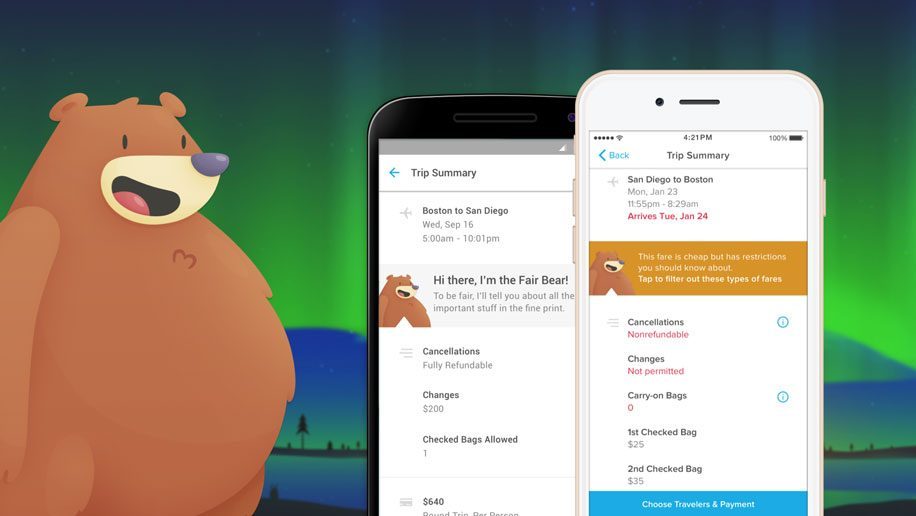 A new tool from airfare prediction and booking app Hopper helps business travellers navigate the hidden fees that lie beyond the illusory “base fares” advertised by airlines.

Experienced travellers know that airline base fares are often far less than what’s actually paid for travel. Taxes and government-mandated fees add to the cost of an airline ticket, but so do ancillary fees charged by airlines.

As airlines increasingly unbundle services, Hopper’s new “Fair Bear” function alerts travellers booking travel through the mobile app about the costs that may be incurred for:

A new analysis of airfares conducted by Canada-based Hopper found that the average cost for changing a domestic US flight is $287. The average fee for a first piece of checked luggage is $25, while it costs travellers an average of $59 to check two pieces of luggage.

On international flights, the average change fee is $250, while cancelling a flight costs an average of $300 in the relatively rare instances where cancellations are even permitted. About two-thirds of international flights still include at least one free checked bag, Hopper found.

“And, things are about to get more confusing. The three major domestic airlines are rolling out basic economy tickets which are great deal for no-frills fliers because they offer a super cheap base fare. However, these fares have also been called things like ‘misery class’ and an ‘insult to human dignity’ because you can’t change or cancel your flight, choose your seat, you’ll board last, and you can’t use the overhead bins.”

Fair Bear is available on Hopper’s mobile app for Android and iOS devices.