As widely expected Emirates’ introduction of premium economy class is now more definite than ever.

Its president Sir Tim Clark has announced that his airline is very likely to introduce a premium economy class within the next 12 to 18 months.

According to Reuters, Sir Tim Clark said “I would think we would have it in the airline within the next year to 18 months, hopefully up and running. We are at the stage of finding out what form [premium economy] will take.”

Adding premium economy, roughly defined as a half-way house between business and economy, is a natural development for Emirates.

And it’s a major development. Because whatever Emirates does its Gulf rivals will eventually follow irrespective of what they might say in public.

Why? All the Gulf nations and their home airlines have been affected by the falling oil price.

Not only is Emirates profitability down but recent expansion has resulted in a reduced load factor (fewer seats filled per flight on average).

Recently Emirates introduced a seat selection fee for some passenger categories in order to boost revenue. Other ancillary fees may follow.

But also more and more of Emirates main rivals have or are introducing a premium economy class.

For example, Emirates must have received negative feedback that, on its main JV (joint venture) routes with Qantas between Europe and Australia, Qantas offers premium economy but Emirates does not.

Likewise on the voluminous routes between Europe, the Gulf and the Far East we see almost every major carrier offering good premium economy classes whereas Emirates still fails to offer any equivalent.

And therefore Emirates (and its Gulf rivals) risk being left behind, especially as the comfort gap between business and economy class grows ever wider.

What we are likely to see from Emirates is the sort of standardised premium economy now being seen at the major airlines like that of Lufthansa and Singapore Airlines.

One would expect to see Emirates’ premium economy installed initially on its fleet of A380s, particularly those aircraft which fly alongside Qantas between Europe, the Gulf and Australia. 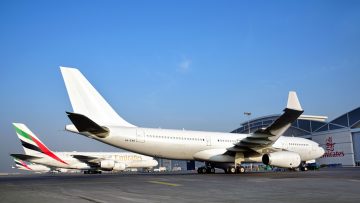