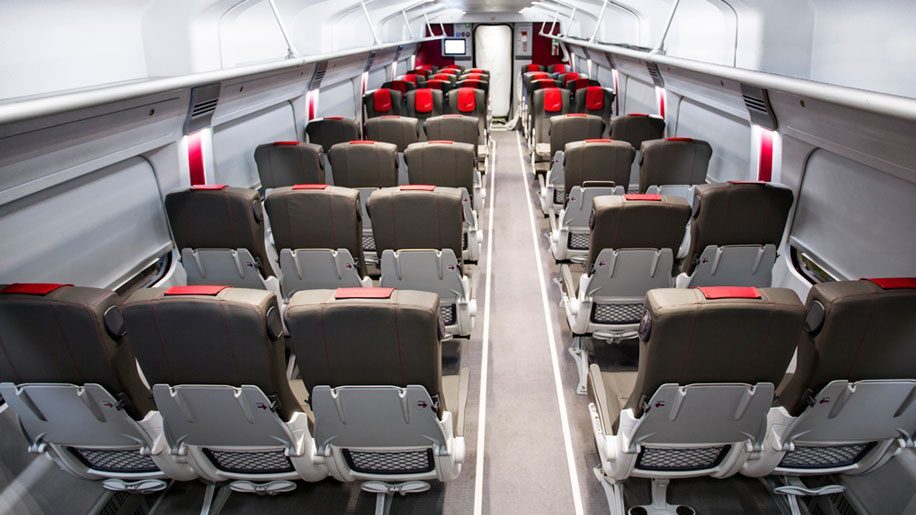 Whereas airline passengers are being allocated less and less space as the years go by, those travelling by train continue to have old-fashioned standards of comfort at their disposal.

But for how much longer? I ask, because with its new generation of high-speed trains Spain’s Renfe will densify seating.

According to the International Rail Journal (IRJ), Renfe will be densifying seating in both business (first) and tourist (standard) class on a new fleet of Talgo Avril trainsets.

These are high-speed trains intended for long-distance international routes and yet they will be offering seating which many suspect is little better than London’s outer-suburban commuter trains.

IRJ reports that each Avril trainset will accommodate 521 passengers with 80 per cent of the seating in tourist class configured five-across 3-2 and 20 per cent in business class disposed four across 2-2.

Note that the image above is taken from Talgo’s website on a page promoting the Avril, and is not from Renfe.

As Mark Smith, The Man in Seat Sixty One, tweeted: “High-speed trains with 2+3 seating in 2nd class only 2+2 in 1st? These could be trains for savvy passengers to avoid.”

Today’s configurations on Europe’s long distance high-speed trains are three across 1-2 in first and four across 2-2 in standard.

But for how long will this comfy situation last? In years to come will other train firms be tempted to follow the lead set by Renfe? And Renfe itself may also decide to install the tighter seating in the other types of high-speed trainsets it operates.

After all, as Europe’s railways become more commercially minded they will begin to realise, as have the airlines, that adding more seating equates to higher revenues.

These Avril trainsets are being constructed by Spanish manufacturer Talgo and are intended for use on international high-speed routes.

Renfe has ordered 15 trainsets with an option on a further 15.

However UK rail travellers can rest easy. It is unlikely similar train configurations will ever be seen in the UK.

Why? Because the UK’s rail loading guage is more restrictive so (long-distance) UK train bodyshells are less wide. One only has to travel on one of Virgin Trains’ Pendolinos or East Midlands’ Meridiens to see what I mean.