Hainan Airlines has announced the launch of a weekly non-stop service between the southwestern Chinese city of Guiyang and the French capital Paris.

During the winter-spring season, the flight to Paris departs from Guiyang Longdongbao International Airport every Sunday at 0130, and arrives at Paris Charles-De-Gaulle Airport at 0620 on the same day. The return leg will leave Paris at 1430, and land in Guiyang at 0830 on the following day.

However, the scheduled departure and arrival time will be slightly different during the summer-autumn season, which, according to the Civil Aviation Authority of China, lasts from March 31 to October 26 this year.

A three-class Boeing 787-9 Dreamliner will be used on the route, consisting of 30 business class seats configured in a 1-2-1 herringbone format, as well as 36 premium economy seats and 226 economy seats in a 3-3-3 setup.

Business class is equipped with 180-degree lie-flat seats. Meanwhile, each seat throughout the entire aircraft is outfitted with an entertainment on-demand system. The use of portable electronic devices will also be permitted on board during the entire journey.

Guiyang is the capital city of China’s southwestern Guiyang Province. This is the first route between Guiyang Province and France, and the fourth route operated by the airline between China and France following its Xi’an-Paris, Chongqing-Paris and Shenzhen-Paris services. 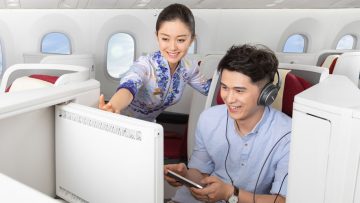