SpiceJet has announced its third daily direct flight on the UDAN route of Hyderabad-Puducherry-Hyderabad, starting August 16.

The new launch is in harmony with the Prime Minister’s vision of enhancing regional connectivity in order to transform the lives of middle class India.

With this addition, Puducherry will be connected to Delhi, Mumbai, Bengaluru, Chennai, Tirupati, Ahmedabad, Jaipur, Chandigarh, Vijaywada and Varanasi with onward connections from Hyderabad.

Under the first phase of the Government of India’s UDAN Regional Connectivity Scheme, the low-cost carrier has been awarded six proposals and 11 routes

Out of the six finalised proposals, four will cater to unserved markets of Adampur, Kandla, Puducherry and Jaisalmer while two will be for underserved markets of Porbandar and Kanpur. Flight operations have already commenced on Mumbai-Porbandar-Mumbai and Mumbai-Kandla-Mumbai routes from July 10.

“SpiceJet is glad to announce its third UDAN route and is proud to be a part of the nationalistic agenda of regional connectivity. The new flight will get Puducherry closer to major destinations on SpiceJets’ network,” says Shilpa Bhatia, senior vice president, commercial, SpiceJet.

It will operate a Q-400 aircraft on this route. The airline owns a fleet of 20 Bombardier Q400 planes, which can seat 78 passengers. 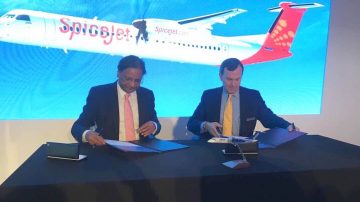