“We have steadily developed, expanded and upgraded our global network and Chicago is an important link,” said Chen. “After we launch service to Chicago and add flights on other North America routes, Eva will be offering 80 flights a week to Asia by the end of the year. Our flight frequency will outnumber that of every other airline in this market.”

Eva will be deploying Boeing B777-300ER on the route, which it will service four times weekly. The B777-300ER is configured with 333 seats – 39 in Royal Laurel Class (business), 56 in Elite (premium economy) and 238 in economy – and features in-flight wifi and the latest entertainment systems.

Details for the service are as follows (all times local):

The Chicago route is the latest in a series of service expansions to North America from the airline. On October 3 this year, Eva Air increased the frequency of flights on its Taipei-New York (JFK) service from ten times weekly to twice daily, following an earlier increase from daily to ten times weekly back in July. Meanwhile its Taipei-Seattle route will increase from seven flights weekly to ten, starting November 19, 2016.

Fancy winning a trip to North America aboard an Eva Air flight? Then check out Business Traveller Asia-Pacific’s November competition for your chance to win two free Elite Class tickets with Eva Air from Hong Kong to a destination in the US or Canada of your choice. 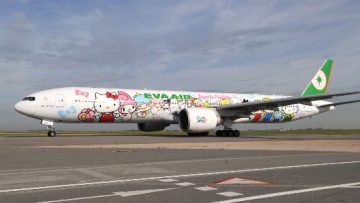