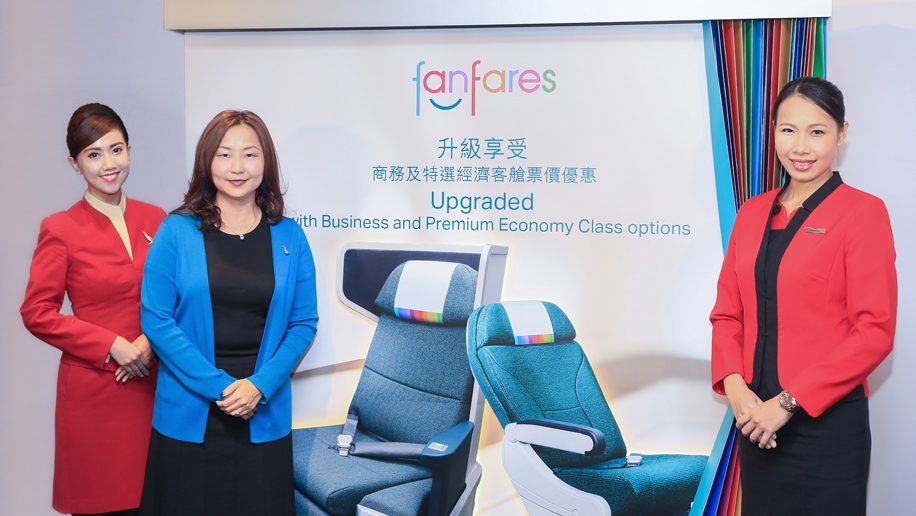 Cathay Pacific and its sister airline Dragonair will now offer business and premium economy options in addition to its usual economy seats on certain routes of its weekly “fanfares” programme, to celebrate its fourth anniversary.

This week “fanfares” is offering a total of 11 destinations, five of which have upgrades available. These include business class tickets to Seoul, Phuket and Los Angeles, and premium economy to Milan and Vancouver. For the rest of this month five destinations each week will be available for upgrade offerings.

Additional benefits include extra baggage allowance in business and premium economy classes, advance seat reservations and, for loyalty members, the ability to earn 125 per cent of miles travelled in business fare class “I”, and 110 per cent of miles in premium economy fare class “E”. Business class travellers booking fanfare seats will also receive normal business class benefits such as use of the airlines’ lounges.

Detailed premium offers this week are as follows:

Speaking about the additions to the promotion, Liza Ng, general manager of sales, Pearl River Delta and Hong Kong, said: “‘Fanfares’ has been offering economy class seats since its launch in October 2012. In this year’s fourth anniversary, we would like to give a big surprise to our fans, allowing them to choose business and premium economy class. The mileage offers are equivalent to what a normal business or premium economy class passenger can earn, and the right of lounge access is also the same as a business class passenger. We hope our fans can have a full premium class experience.”

While the offer is good news for customers, it is also an indication that the airline is responding to economic pressures by trying to drum up business on underperforming routes. Other recent moves that speak of financial strain include the announcement that the airline will switch to a 10-across layout on Boeing aircraft, the introduction of fuel surcharges and the recent financial statement that revealed major fuel hedging losses.

“Fanfares” has offered discounted rates on more than 90 routes to 33 countries across both airlines’ networks. Customers can book the promotional fares from 8am (HK time) on Tuesday every week.