Garuda Indonesia has become the first carrier to operate flights from the new Terminal 3 Ultimate at Soekarno-Hatta International Airport.

“We currently operate 40 per cent of the total area of Terminal 3 Ultimate for Garuda Indonesia domestic flights only. International flights still operate from Terminal 2E,” said AP II’s head of corporate and legal affairs, Agus Haryadi, to the Jakarta newspaper.

Passengers flying with Garuda who have not been made aware of the change can use a bus shuttle service to travel from Terminal 2E to Terminal 3 Ultimate.

Meanwhile, in order to allow construction of the connection link between Terminal 3 and Terminal 3 Ultimate to begin, AP II will temporarily move a number of carriers out of Terminal 3. Air Asia will move to terminals 2E and 2F, while Lion Air will operate from Terminal 1B.

As previously reported, Terminal 3 Ultimate was originally slated to open in July but this was subsequently delayed as officials at Indonesia’s Transportation Ministry determined that the lack of back-up electricity, defective toilets, and an obstructed view from the air traffic control tower would be too much of an operational risk.

Loading comments...
Read Next
New Waldorf Astoria hotel planned for San Francisco
Read Previous
Qantas to take delivery of B787 next year, but defers A380 order
Our Awards 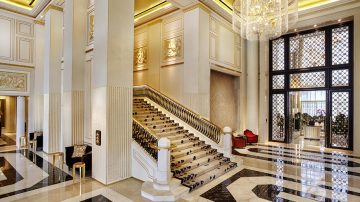