The Westin Dubai, Al Habtoor City has opened ahead of schedule on Sheikh Zayed Road. The new property is the largest Westin in Europe, Middle East and Africa with more than 1,000 rooms.

The hotel has a total of 1,004 rooms including 142 suites. The hotel’s lobby and interiors have been inspired by the region’s Hajar Mountains and feature stylised motifs of the Art Deco movement.

Also “opening soon” will be the hotel’s spa and gym. This will have 20 treatment rooms, which include separate male and female areas, a Hamman, steam room, sauna, hot tubs, whirlpools and specialty showers. The gym will have equipment from Technogym, a yoga studio and in total the property will have three rooftop swimming pools, including a splash pool for children at the Westin Family Kids Club.

The hotel has 15 meeting rooms  and two additional outdoor spaces will open soon. The 1,450m2 Al Joud ballroom has a separate entrance, pre-function hall and can host events with up to 1,200 guests.

“Together with Al Habtoor Group, we are excited to deliver Westin’s well-being promise to guests at Starwood’s largest hospitality project in the Middle East,” said Michael Wale, President, Starwood Hotels & Resorts, Europe, Africa and Middle East. “This opening reaffirms Westin is on track to double its presence in the Middle East in the next three years.” 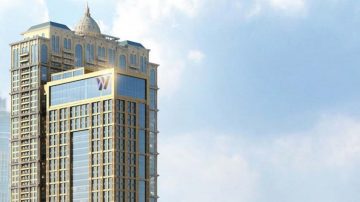 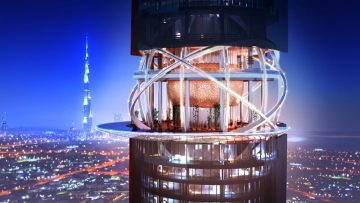