The opening of the two new budget hotels extends the number of Accor properties in South Korea to 19. The company expects its network to grow to 27 hotels by the end of 2019.

Ibis Ambassador Seoul Dongdaemun is located near to popular attractions such as Gwangjang market and the Dongdaemun Design Plaza. Euljiro 4-ga subway station is also situated nearby.

Rounding things up are two function rooms that can accommodate up to 70 people.

Meanwhile, the 237-room Ibis Ambassador Busan Haeundae is also close to a subway station and the Busan Exhibition and Convention Centre, while Haeundae beach is just a six-minute walk away.

Facilities include Ibis Kitchen, an F&B outlet serving popular Mexican dishes, as well as a bar, spa and fitness centre. The hotel is also home to two flexible meeting spaces that can accommodate up to 180 people in a theatre-style configuration and 120 guests for corporate events.

“The Ibis brand was first introduced to South Korea 10 years ago, the dual openings of Ibis Ambassador Seoul Dongdaemun and Ibis Busan Haeundae will give corporate and leisure guests added hotel choices when they travel to the country,” said Patrick Basset, chief operating officer of Accorhotels, Upper Southeast and Northeast Asia.

Loading comments...
Read Next
Ethiopian Airlines to commence A350 flights from Heathrow this month
Read Previous
Etihad Airways deploys B787-9 to Shanghai 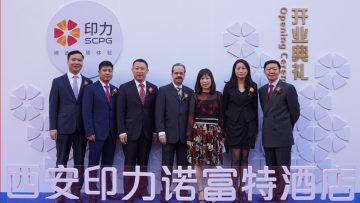